The Parable of the Big Hands

This is an old story, retrieved from the dusty recesses of my memory, but it's as relevant today as it ever was. Names changed to protect the incompetent...

A number of years ago I was called in to help an integration company who had been struggling for a number of weeks with a manufacturing client. They had delivered a factory automation system, introducing computer-controlled fabrication and handling machines, replacing the manually operated mechanical kind. The project had been justified upon increased productivity and reduced material wastage - yet reduced productivity and increased metal wastage were being observed. Not really the results anyone was hoping for, customers blaming the vendor, vendor blaming the users etc.

My job was to "troubleshoot the new software" and "find the bugs" before the manufacturing company started firing live ammo.

Step 1 was to get a coherent problem statement. It seemed that in the vendor's lab everything went according to plan - sheet metal machines could be reconfigured in tens of seconds via a new software load - yet at the factory it was taking minutes and materials were frequently being cut to the wrong dimensions.

So what was different between the factory and the lab? I was assured that there was no differences at all - machines had been swapped, the exact same builds had been uploaded to the machines at both sites, error logs had been downloaded etc. But clearly there was a difference, otherwise it would be working (or broken) in both places.

I figured there must be something environmental - how else could the exact same machine, software, and configuration work perfectly in one location and not another. "So, tell me about this factory" I asked. "Never been there" was the answer (believe it or not). Ah-ha!

So off we go to the warehouse/factory thingy. We never even got through the tour of the floor before we made the critical observation - these metalworking dudes have really big hands! If your job consists of throwing around huge blocks of steel, cranking big heavy leavers, and turning giant bolts, then you soon develop a pair of mitts like shovels.

Why was this important? Quite simple. The keys on the small numpad-type keyboard that had been specially made for entering the program parameters on each machine were a standard keyboard size, and were therefore simply far too small for the bunch-of-bannans fingers of the guys that had to use it. These guys are hardcore welders and whatnot, they don't have our delicate little programmer hands! 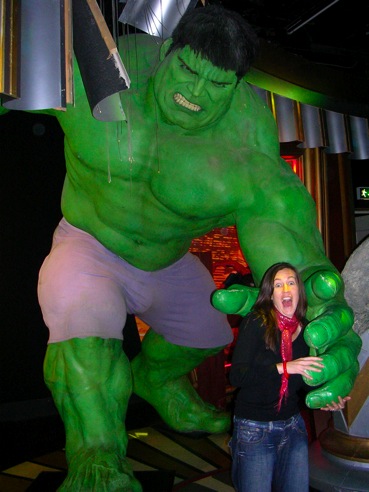 So what's the lesson here? Know Your Users. It's as simple as that. You have no business even touching a keyboard (of any size) until you know who your users are, where they work, how they'll interact with the system, and what successful use is. Remember - you're not building the software for yourself or your business analysts, you're building the software for them. Get to know them.
Posted by Unknown at 21:28